Far from home indeed! Pacific Coast! Actually, I am back home again, I am jet lagged like hell, but I want to share one or 2 more things about our travels to the States.

As mentioned before, we are visiting friends in Berkeley. Anna Babka and Peter Clar have been the best hosts, thanks a lot!

We go visit San Francisco – obviously. Several times. But one of the highlights, was not another big city, it was a coast and an institution. We travelled along the Pacific Coast. Had a picnic at a deserted and spectacular beach. Recharged our batteries. But that’s not the highlight I am talking about! We were on the road towards Big Sur, not because of Jack Kerouac or Henry Miller but because of a voice that has been calling to us for decades. We went to see Joan Baez live.

Ensalen Institute features a sulphur bath chiselled into a ragged pacific coast. Hunter S. Thompson was once the janitor of this very very special place. We delved in! But no photos please, people weren’t exactly fully dressed!

Joan Baez once rented a house in its vicinity for $ 35 – a month. The well-to-do and well-aged audience was highly amused by this confession. The audience was also totally up-to-date with its boot-legging gadgets!

But let’s not joke about this. Who could listen to Joan Baez singing at this place close to home – for her, not for me. Joan Baez is blessed with a voice and an integrity that allows her to sing about God and religion to us atheists without any akward moments… That’s how the very smart Anna Babka put it. And I agree. Fully.

It was a family gig for many reasons: Joan Baez sang several duetts with her niece, her mom (aged 99 1/2) was among the audience, the rest of the audience consisted of die-hard fans, die-hard fans with a long tradition of individual self-expression: some clapped in sign language, some danced with hula hoops or other people, some did Tai-Chi exercises. And still: no akward moments at all!

For it’s fact: When you visit San Francisco or Berkeley or Ensalen Institute one thing is pretty obvious: The States would be a very very different place if ‚the movement‘ hadn’t taken place.

So, I will not make any flower power jokes for a long long time. For Joan Baez is as real and as street as any urban hiphop movement is. And she has been just that for a longer time!

Words of the wise: „My motto these days:„, says Joan Baez, „small victories and big defeats.“ Again, no akward moment at all. No signs of selling out or feeling defeated. She adds: „Do, what you have to do, do what you know is right.“ And I intend to do just that! 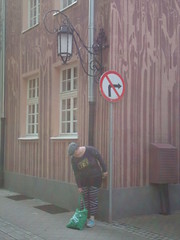